I was very happy to be invited to the recent World Retail Conference in Madrid to give a short talk entitled ‘KISS: Keep It Simple Stupid’.

Kelly Johnson, who was the lead engineer at Lockheed developing the U2 and Blackbird spy planes in the US in the 1960’s, originally coined the phrase. His belief was the best systems are simple rather than complicated. This has been echoed by many great minds in the past from Leonardo Da Vinci who said ‘Simplicity is the Ultimate Sophistication’, to Mies Van Der Rohe with his mantra ‘Less is More’.

The photo below perhaps illustrates the concept of KISS as applied to retailing  - low (no?) rent in a prime location, a focussed product range clearly presented, flexible pricing and direct-to-consumer delivery. 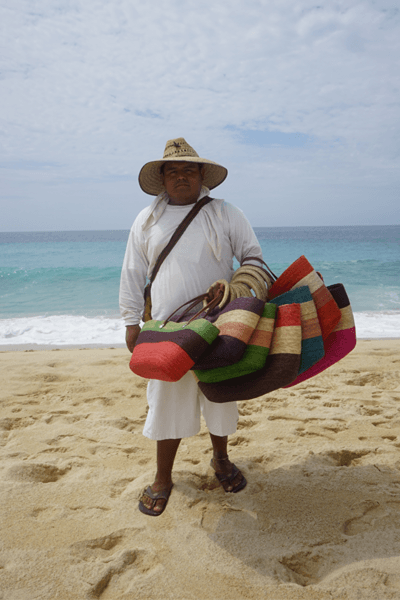 Modern retailing has become a very complex business, in an increasingly fragmented world.

I’ve been out of the mainstream retail industry, apart from brief forays as an investor or non-exec director, for the last 20 years, living in the South of France and Los Angeles, following a career covering almost every kind of retail, in many countries, both as a practitioner and consultant.

Returning to the fray with my online men’s casualwear brand www.supremebeing.com (more of which later), I see a very challenging and turbulent landscape, and also a lot of muddled thinking.

I went into a new flagship New Look store on Oxford Street last week. It looked great, but the surprising thing to me was the key price points were pretty much the same as the business I left 20 years ago, following our listing on the LSE. Research shows that apparel prices globally have devalued by 80% in 20 years. The same is true of most major consumer categories, from toys to electronics. At the same time hundreds of millions of people around the globe, especially in Asia, have become much wealthier. They’ve become consumers.

The result is that consumerism is destroying the planet. We buy too much of everything. We’ve become addicts to shopping, mainlining on the dopamine hit we get every time we make a purchase. But it comes at a massive cost. That cost is the despoliation of our planet.

If we stick with the fashion industry alone the facts are frightening. Around 140 billion (yes that’s billion with a b!) items of apparel are produced annually, around 20 pieces for every human being on the planet, 75% of which will end up as landfill, with about 10% of it never worn, and another 15% only worn once! 10% of all the world’s oil production goes to fuel this madness, along with 25% of all the world’s entire chemical production. Plastic microfibers from synthetic fabrics contribute 85% of the plastic found in the sea. Ordinary cotton occupies only 2.5% of the world’s arable land area but consumes 16% of all artificial fertilizers, over 10% of pesticides and 25% of insecticides, almost all of which are harmful to humans, as well as birds, fish and other mammals. There’s a lot more I could add but you get the idea.

What’s obvious that we simply can’t go on like this. We can’t feign ignorance as an excuse for this immorality any longer.

A new generation of consumers are entering the marketplace, who are much more environmentally and ethically concerned about the goods they purchase. We are entering a new era where we must start to buy less for more, not more for less, reversing the trend of the last 20 years.

The Internet, and the consequent enabling of online retailing, has produced an ‘Eighth Day’ effect, another pile of costs for retailers where the cake is no bigger but expensively cut into 8 rather than 7 slices.

From the consumers point of view this has created a retail nirvana, where they don’t even have to get up off their bums to go to the shops to get the aforementioned dopamine hit of shopping, as the biggest shopping mall in the world is, literally, at their fingertips.

The response of traditional retailers has been often panicked and economically self-harming.

If we look at the ‘big four’ food retailers in the UK they all jumped on the bandwagon of home shopping and (next to free) delivery, without properly considering the cannibalising effect on their hugely expensive investment in their physical stores.

This has been massively expensive, adding exponentially to their costs and logistical complexities, but nothing to their market shares and, I would contend, negatively to their profits. The services they offer must be massively loss making (hence no separate breakdown of home-shopping financials in their annual accounts!), and reduce footfall and highly profitable impulse sales in their stores.

Why are retailers offering a better service to customers who don’t come into their stores than those who do? The fast-growing ‘value’ retailers like Primark and Lidl don’t offer home shopping. They have websites that simply entice you to visit their stores with strong product offerings. That’s a sensible strategy.

No one is forcing retailers to offer a loss-making service, especially to unprofitable customers! Online fashion retailers are seeing returns rates of up to 40%. Customers are buying 4 items, enjoying ‘free’ delivery, and sending three back, again free of charge. (A lot of anecdotal evidence suggests a proportion of these returns have been worn, but with these customers not having to face a shop assistant they know they’ll get away with it). Why serve customers like that. You want profitable customers, not loss-making ones. Why not ‘delist’ them?

I’ll offer a few other quick observations about the current state of the retail industry from this practitioner/consultant, but first a warning photograph! 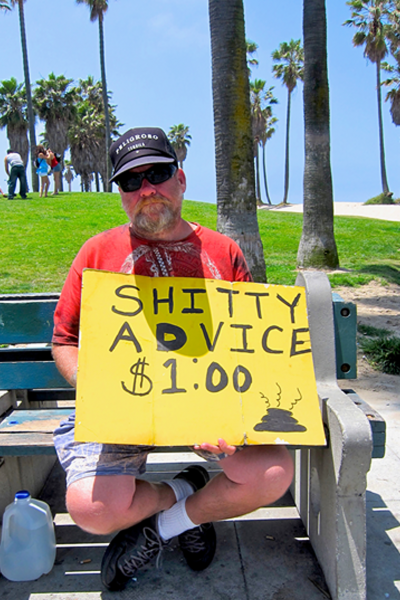 Consultant on Venice Beach, CA (not me – I charge slightly more!)

In researching for my talk at the WRC, I read dozens of well-researched and comprehensive reports online about the “6 Challenges to Retail” or the ‘10 Main Priorities for Retailers’ etc. etc. The common feature was that they suggested almost entirely technological solutions. Almost none of them focussed on what or why you sell something, but on how. They offered a myriad ways to complicate your business with wiz-bang technology. In my experience, most technology ‘solutions’ will rarely work as described, cost a fortune to maintain, and are likely to be redundant in 2-3 years. KISS!

With our focus on simplicity, a good well-edited, keenly priced, well-presented range of products beats any fancy technology.  However the trend of having constant sales and discounts is financial suicide. You devalue your products, and train customers to wait for the discounts (see Macy’s as a prime example). Get your input pricing right, and stick with it. Don’t constantly overbuy. Sell less for more!

We all need to look at how we ‘right size’ our physical businesses, to a level where profitability may be lower in the short-term, but sustainable in the long-term.

The rapid growth of near-invisible online specialist vendors is perhaps the biggest hidden threat of all. These niche micro-retailers, maybe millions of them now, on easy to set-up platforms like Shopify, are nibbling away relentlessly at your product assortment, slowly but inexorably undermining your business.

I’m now one of them.

Take a look at www.supremebeing.com, my latest venture.

We only sell only menswear, mainly because men don’t return much (our returns rate is 3%).

We only use the highest-quality 100% organic cotton (less that 0.3% of global cotton production), from a supplier whose electricity is produced entirely from wind and solar sources, and who recycles 95% of the water used in production (a single white T-Shirt consumes 800 gallons of water to produce!). We have full transparency on the supply chain.

We charge for postage at actual cost, rather than hiding it in the retail price.

We’ve grown a customer base in over 20 countries in the last 15 months via our ecommerce site, on a Shopify Plus platform. Selling direct to consumers preserves our margins. We don’t do sales (though we occasionally have a few discontinued designs on offer) as we don’t generate overstocks. All our garments are printed and finished by hand in England. We produce zero waste.

We are applying our ‘sell less for more’ philosophy, offering timeless designs on men’s casual basics, which we are hoping will be worn many times over many years by our customers, who value style and quality over fashion. Over 30% of sales YTD are customers reordering.

To encourage you to try our products we’re offering a one-time 30% discount exclusively to all WRC attendees until the end of May. Simply use the code WRC30 in the promotion box at the checkout to get the discount. Spend as much as you like!

So, consolidate, right-size, simplify, sell less (and better) for more, only do what’s profitable for you, and try not to destroy the planet in the process.