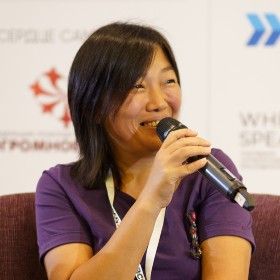 Graduated from the Moscow State Regional Social and Humanitarian Institute, Faculty of Foreign Languages, majoring in “the teaching of English and German”. Having worked as a teacher after graduating from the university she went on maternity leave, and in 2004 Tatiana founded an online store from scratch, which today is visited by more than 2.5 million people in Russia, Belarus, Kazakhstan and Kyrgyzstan every day.

Why an online store?

Being a young mother and not having time for shopping, Tatyana was looking for an opportunity to earn money on her own and opened a platform that would be convenient for herself and other women. So began the story of Wildberries. Despite the discourages of the acquaintances and the emergence of new players in the market, Tatyana has been following her dream for 14 years making shopping comfortable, affordable and easy. And this has been supported by her main partners in life - her husband and their four children. Nowadays Tatyana is ranked 5th in the RBC rating of “25 Most Influential Women-CEOs in Russia” and 2nd place among women in the Forbes list “200 of the richest Russians.” In 2018, she won the business prize of RBC Awards in the nomination "The Entrepreneur of the Year" and the Veuve Clicquot International Business Woman Award 2018 in Russia.

Tatyana Bakalchuk takes a personal part in the management of the company.