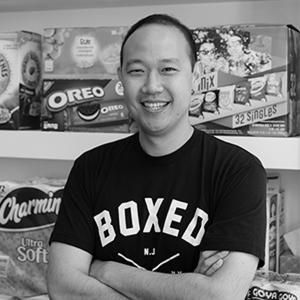 Chieh Huang is Co-Founder and CEO of Boxed.com, a company that is disrupting the wholesale shopping club experience by enabling you to shop for bulk-sized items online or via mobile app and have them delivered directly to your door. Forbes Magazine has named Boxed one of the next “billion dollar startups.”

Started in Huang’s garage 5 years ago, Boxed now has hundreds of employees in facilities all over the United States. Since the garage, the company has sold hundreds of millions of dollars of products and has raised over a quarter billion dollars in funding to date.

Huang’s personal honors include being named to “Bloomberg 50”, Bloomberg Businessweek’s 50 people to watch in 2018, to National Retail Federation’s list of People Shaping Retail’s Future, as one of Crain’s 40 Under 40 and Goldman Sachs’ list of “100 Most Intriguing Entrepreneurs.” In addition, Entrepreneur Magazine included Chieh on their list of “The 50 Most Daring Entrepreneurs.”

You can read more about Chieh’s story in People Magazine’s profile of him for their “American Dream” series, tracking his growth from humble beginnings to running a fast-growing online retailer. You can also catch more of him at TED.com delivering a talk about his lifelong battle against micromanagers.