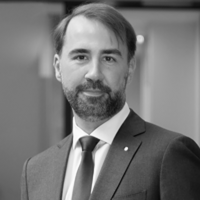 Tobias has been the Chief Executive Officer of SPAR International since 2016, having joined SPAR in 2000. He was previously the International Retail and Marketing Director, responsible for the development of SPAR as a global retail brand through new country expansion as well as the development of retail formats and international marketing programmes. In 2005, Tobias relocated to Asia where he led the launch and development of SPAR in China. Having dedicated 10 years to growing SPAR in China and thereafter in Asia to a scale of 1 million sqm sales area and 2 Billion Euro retail sales, Tobias returned in 2015 to lead SPAR International and work closely with SPAR partners worldwide to implement a strategy of growth entitled “Better Together”, which has seen SPAR grow its presence to 13,501 stores in 48 countries worldwide.

Tobias has been a member of the Board of SPAR International since 2007 and is a Board member of FMI, representing food and consumer product retailers and wholesalers worldwide as well as the Independent Retail Europe, a European association acting as an umbrella organisation for groups of independent retailers in the food and non-food sector.